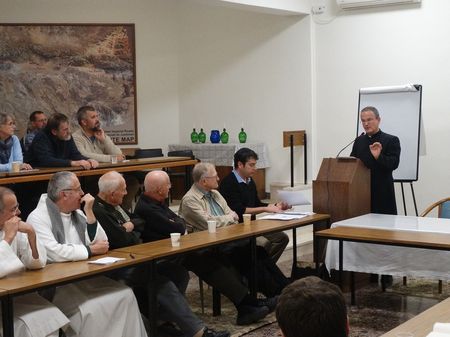 Tuesdays at Tantur seeks to establish a place for conversation. The program is co-hosted by the Jerusalem Global Gateway and Tantur Ecumenical Institute and nurtures open discussion on topics relevant to the life of Jerusalem and the Holy Land.

The fall session of Tuesdays at Tantur, which spanned from mid-October to the beginning of December, had six sessions. We first welcomed Prof. Fr. Brian Daley, the Catherine F. Huisking Professor of Theology at the University of Notre Dame. He specializes in biblical studies and Christianity, Judaism in antiquity and the history of Christianity overall and is the executive secretary of the Orthodox-Roman Catholic Consultation in North America. A recipient of the Ratzinger Prize in Theology awarded by the Pope in 2012, Fr. Daley spoke on the future of Catholic-Orthodox Christian dialogue.

In October, Dr. Ali Qleibo spoke about how ancient shrines preserved on our hillsides can teach us about Palestinian culture and history. Dr. Qleibo is an artist, author, and anthropologist who is the former director of cultural studies program at AQU, a fellow of the Shalom Hartman Institute, director of the department of fine arts at AQU, and former assistant professor at Birzeit University. At the Center for Jerusalem Studies, Dr. Qleibo developed the Muslim tourism itinerary in Jerusalem encompassing tangible and intangible heritage.

In November, we hosted Professor Rabbi Daniel Sperber, a world renowned expert in the field of how Jewish law can see Hinduism as a monotheistic faith. Rabbi Sperber is the Milan Roven professor of Talmud at Bar-Ilan University and an expert in classical philology, history of Jewish customs, Jewish art history, Jewish education and Talmudic studies. Currently, Rabbi Sperber is the President of the Ludwig and Erica Jesselson Institute for Advanced Torah Studies and serves as rabbi of Menachem Zion Synagogue in the Old City of Jerusalem. He is the author of Minhagei Yisrael: Origins and History covering the character and evolution of Jewish customs. In 1992, he was awarded the Israel prize for Jewish Studies. Rabbi Sperber brought to the attention of those in attendance the extensive work which the Chief Rabbinate of the State of Israel did with Hindu leadership from 2007 to 2008, which has gone a long way to remove misconceptions about each side’s faith.

Tuesdays at Tantur continued with Professor Gary Anderson, Hesburgh Professor of Catholic Theology, who studies religion and literature of the Old Testament with special interest in the reception of the Bible in early Judaism and Christianity. Currently, he is a senior research fellow at the Institute for Advanced Studies at Hebrew University. Dr. Anderson’s recent publications, Sin: A History and Charity and The Place of the Poor in the Biblical Tradition trace the way these biblical concepts shape the development of subsequent Jewish and Christian theological discourse. He spoke on the significance of the imagery of the tabernacle and its relation to biblical passages about seeing God’s image.

Finally, Tantur welcomed Rev. Fr. David Neuhaus, SJ. A Jesuit priest ordained in 1994, Fr. Neuhaus holds degrees in theology and Scriptures from the Pontifical Biblical Institute in Rome and was appointed Patriarchal Vicar for Hebrew-speaking Catholics by Patriarch Fouad Twal on March 15, 2009. He is also coordinator of the pastoral care for migrant workers and asylum seekers. Fr. Neuhaus has taught Scriptures at the Latin Patriarchate of Jerusalem Seminary and in the religious studies department at Bethlehem University. At this event, he spoke about who the Christians of Israel are today and their challenges living in the Holy Land.

Tuesdays at Tantur is a weekly event that seeks to establish a community of conversation. Co-hosted by the Jerusalem Global Gateway and Tantur Ecumenical Institute of the University of Notre Dame, the series nurtures open discussion on theological and other topics relevant to the life of Jerusalem and the Holy Land. Stay in touch with future events by subscribing to the Jerusalem Global Gateway’s email list.

Originally published by Ra’anan Mallek at international.nd.edu on February 27, 2017.